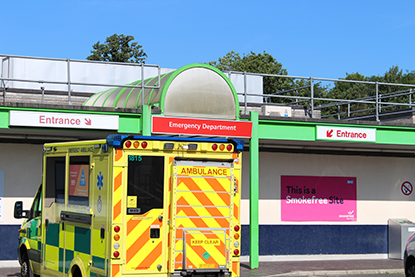 The NHS in England has saved an additional 1,000 patients with severe injuries since major trauma centres were established in 2012.

New findings show the creation of major traumas centres has led to the survival of almost 1,000 patients who have suffered some of the most severe and complicated injuries thanks to top teams of surgeons, doctors and clinical staff. Patients also spent fewer days in hospital and had improved quality of life after receiving critical care.

Research into the outcomes of more than 110,000 patients admitted to 35 hospitals between 2008 and 2017 represents an increase of nearly a fifth in the odds of survival from severe injury in the five years from 2012.

Derriford Hospital in Plymouth is the adult Major Trauma Centre for the Peninsula, responsible for the care of the most severely injured patients involved in major trauma, providing 24/7 emergency access to consultant-delivered care for a wide range of specialist clinical services and expertise.

The hospital is part of the Peninsula Trauma Network which brings together all those responsible for treating patients who have undergone major trauma incidents across Devon and Cornwall, including the Isles of Scilly. The Network, which comprises an adult Major Trauma Centre (Derriford Hospital), a paediatric Major Trauma Centre (Bristol Royal Hospital for Children) and 4 trauma units (North Devon District Hospital, Barnstaple, Royal Cornwall Hospital, Truro, Royal Devon and Exeter Hospital Exeter and Torbay Hospital, Torquay), ensures that the patient receives the most appropriate care at the correct time.

Clinical Lead for the Trauma Network, Dr Tony Hudson said: “In the South West these changes have meant that, whenever possible, patients suspected of having major injuries are transported directly to the Major Trauma Centres in Plymouth or Bristol, bypassing some of the other hospitals in the region.

“When it is not possible to get to a Major Trauma Centre within 60 minutes, or the patient has immediately life threatening injuries, they are taken to any of the nearest Trauma Units in the region in Exeter, Torbay, Truro or Barnstaple where immediate life-saving interventions can be performed. Patients once stabilised can then be transferred to the Major Trauma Centre for specialist care.

“The resulting flow of patients predominantly to the Major Trauma Centres has allowed the teams at those hospitals to become increasingly expert in the care of trauma patients. There is no doubt that the vital lessons learnt by our military colleagues from the South West in the recent conflicts in Iraq and Afghanistan have also helped improve trauma care locally.

“Enhancements to pre-hospital care by the South Western Ambulance Service and the Devon and Cornwall Air Ambulance Trusts have also helped improve trauma care and allowed rapid transport directly to the Major Trauma Centres. The introduction of night flying operations by DAAT has meant that even at night, patients can receive pre-hospital specialist care and transport to the wider range of life saving services available at the Major Trauma Centres. These radical changes have contributed to the improving survival rates from Major Trauma.”

Professor Keith Willett, NHS England’s Medical Director for Acute Care, who led the changes in 2012 and now leads the wider NHS urgent and emergency care review, said: “We have made major advances in urgent care over the last five years as this study demonstrates. As the NHS develops its ten year plan, the success of major trauma centres will help inform how we deliver better care for patients through the use of specialist clinical networks.”

Professor Chris Moran, NHE England’s National Clinical Director for Trauma Care, said: “This study shows that changes to trauma care, designed by clinicians, are saving hundreds of lives every year. Patients suffering severe injury need to get to the right specialist centre staffed by experts, not simply the nearest hospital. Thanks to the skills of NHS staff, we are confident that we will continue to see further increases in survival rates for this group of patients.

Professor Timothy Coats, Professor of Emergency Medicine at the University of Leicester, said: “These findings demonstrate and support the importance of major trauma networks to urgent care with figures showing there were 64 more survivors in 2013 rising to an additional 320 in 2017. Over the course of the five years 960 people have survived major trauma injuries where before they would probably have died. It’s a fantastic achievement.”

The study states that the whole system change to major trauma centres can be ‘associated with significant improvements in care and outcomes for patients with severe injury’.

It concludes:  ‘A change in the organisation of care for patients with severe injuries, including the development of Major Trauma Networks that cover the entire national population, was associated with a significant 19% increase in the odds of survival for trauma victims who reach hospital alive.’

The NHS reorganisation created 27 designated Major Trauma Centres, with the London network launched in April 2010 and networks across the rest of the country operating since April 2012.