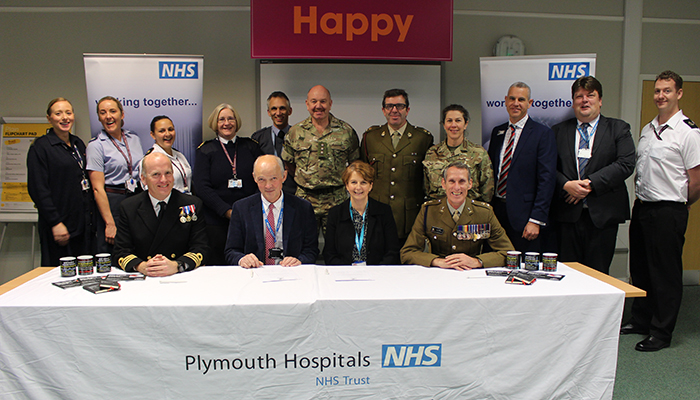 Plymouth Hospitals NHS Trust has joined nearly 2,000 organisations from across the UK who have pledged their support to those involved with the Armed Forces, by signing the Armed Forces Covenant.

On Monday, representatives from the Ministry of Defence, 243 Field Hospital, Wessex Reserve Forces and Cadets’ Association came together to witness Plymouth Hospitals’ Chief Executive, Ann James, and Trust Chairman, Richard Crompton, sign the document and pledge their support on behalf of the Trust.

“It’s a great privilege to have the opportunity to publicly demonstrate the importance of our relationship with the military and to be able to prove our commitment to them in this way”, said Richard.

The Armed Forces Covenant, which was first published in 2013, acts as an agreement in principle from each organisation, that those who serve or who have served as part of the Armed Forces community are treated fairly. The Covenant sets out the relationship between the nation, the government and the Armed Forces, with organisations promising their support through services, policies and projects. 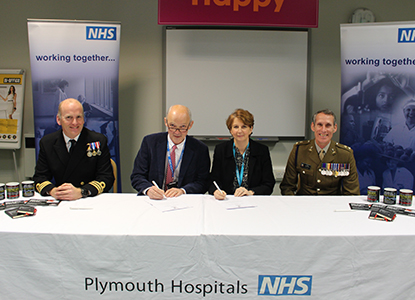 “We are delighted that you [the Trust] wanted to demonstrate your support for the Armed Forces community by signing the Armed Forces Covenant,” explains Jon Beake, Senior Regional Employer Engagement Director for the Wessex Reserve Forces and Cadets’ Association. “It has been a pleasure discussing how it should be tailored to make it relevant for Defence and for the Trust to provide mutual and tangible benefit.

“The Trust’s Covenant includes supporting the employment of veterans, service spouses and reservists, which has qualified them for a Bronze Employer Recognition Award. As the Trust is one of the largest employers in Plymouth, and Plymouth has such a large military population, it is really important that we commit to working so closely together in this way.

“I invite every employer/organisation to emulate the Trust in publicly declaring their support for the Armed Forces and their families.”