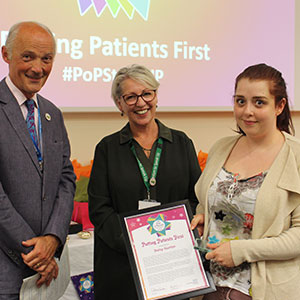 Her nominator said that:

"Daisy has such a kind and caring nature towards all her patients which makes them feel safe and relaxed. With one particular scared and agitated elderly patient, Daisy sat with her, talking to her to calm her down and ease her breathing.

"She stayed long into what should have been her own break time. She even went to get her mobile phone to show the lady pictures of her dogs (as the lady liked animals). This helped to distract her and keep her calm, which was so important as the more agitated she got the worse her breathing became, which Daisy had recognised early on.

"All of this was whilst caring for at least 10 other patients too, but she never appeared flustered or complained, she just got on with the job with a smile on her face."

Sarah B from nicu