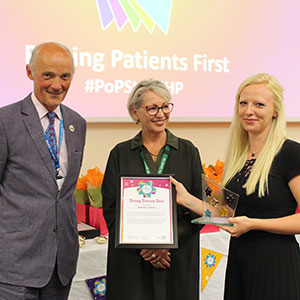 "Leaving work one evening, Amelia came across a young man having a mental health crisis. His father was with him and was desperately trying to convince him to return to the Emergency Department. Amelia helped the patient when he was lying on the ground banging his head, spoke to him calmly and stayed with him, walking around the hospital grounds, reassuring him, until he agreed to go with her into the department. She then stayed with him for over three hours, calmly talking to him and reassuring him until he was seen by staff there, despite missing her last bus. Amelia’s actions demonstrate that Operating Department Practitioners also care!"

Sue Ives, Healthcare of the Elderly