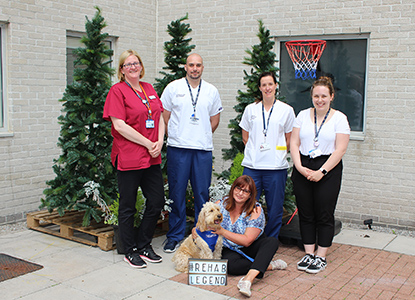 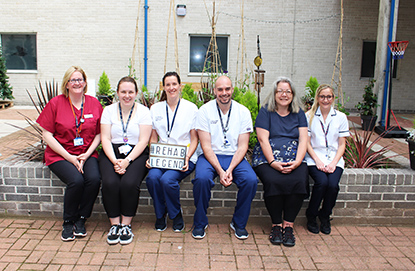 We are delighted to announce that Kate Tantam and the Intensive Care Rehabilitation Team have been announced as the regional champions of the NHS Parliamentary Care and Compassion Award.

The Parliamentary Awards recognise the massive contribution made by the individuals who work in and alongside the NHS.

The ICU rehab team, lead by Kate, have been recognised for their dedication to improving rehabilitation and recovery for survivors of critical illness. They have been named regional champions for the South West of England in the 'Care and Compassion' category.

Inspired by a patient’s story, Kate undertook an 18-month audit which showed that 33% of ICU patients developed symptoms of post-traumatic stress disorder after being a patient in ICU.  Kate advocated for service development to meet the need identified by her research and her energy ultimately led to the recruitment of a multi-disciplinary Critical Care Rehabilitation Team.

The team is currently made up of a specialist physiotherapists, physiotherapy assistants, a clinical psychologist and the animal assisted intervention team.  They are also evaluating their impact and service using research, quality improvement and audit. The research team, which is embedded in the ICU Rehab team has a data analyst, expert Information Visualisation input from Plymouth University and students from the clinical psychology department and the school of computing.

This inter-professional team has helped to shape, share and facilitate a cultural change which extends throughout and beyond the organisation. Since the introduction of the team, the ICU has been able to introduce a Pets as Therapy (PAT) initiative, which sees Hovis the Labradoodle acting as a member of the team, promoting and assisting in physical and psychological rehabilitation.

The Intensive Care Unit now has a garden space of its own thanks to the determination of the team, some kind volunteers, and a lot of elbow grease to clear the unused space. The garden aids rehabilitation and promotes positive mental health for staff, patients and loved ones.  Having an outdoor space also allows terminally ill patients to have their pets visit them in a non-sterile environment.

All of this and more is celebrated through the #rehablegend campaign which promotes the ‘little things; that the inter-professional teams can do to promote and enhance recovery. #rehablegend is a title awarded to anyone who assists with or promotes rehabilitation. The campaign, founded by Kate, has had international reach, with requests from France, Switzerland and Australia for #rehablegend light boxes and badges.

“The NHS’s greatest asset is its workforce,” said Kate. “A team that irrespective of designation, role or location pull together to make a difference and to provide care.

“All of the work that we have done in Plymouth is to point out the everyday excellence already embedded in these teams and say well done. Anyone can make a difference to recovery, and anyone can be a #rehablegend. The little things are the big things when it comes to care.”

One patient said: “Being a patient in Critical Care is like chucking a hand grenade into your life – it blows everything apart.” Kate and her team's work aims to defuse that grenade by promoting and facilitating recovery by humanising the Critical Care environment and building services.

Nominations for the awards were put forward by Mr Johnny Mercer MP and Mr Luke Pollard MP. As regional champions of the South West of England, the team have been invited to a special awards ceremony in Parliament on 10 July where the national winners will be announced. Proceedings will be hosted by Dr Sarah Wollaston, Chair of the Health and Social Care Select Ceremony, with a special performance planned from the NHS Choir.

Wishing the team the very best of luck!