A Plymouth-led project that could revolutionise care for Parkinson’s patients and staff was launched yesterday at a national event, held at the Future Inn in Plymouth.

The launch took place following the recent announcement of £75,000 funding from The Health Foundation and £15,500 from a Parkinson’s UK Excellence Network Service Improvement Grant. 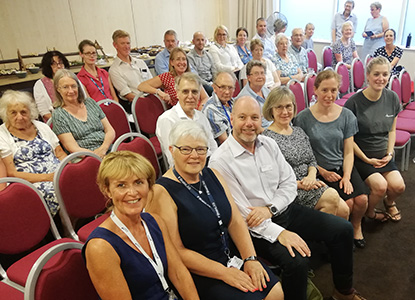 The key aim of the project is to bring together necessary stakeholders (people with Parkinson’s, carers, researchers and PDNS) to co-design the service. One of the main focuses will see patients use a wrist-worn device known as a Personal Kinetigraph (PKG®) to help them and a specialist team monitor their condition at home.

Another vital element is that the service will work better for healthcare staff; removing some of the frustrations and isolation of working in the current system, and resulting in enhanced wellbeing.

The service will also deliver an education package, letting people know how to ensure the service works best for them, as well as providing people with the knowledge they need to manage their Parkinson’s symptoms better themselves and ‘live well’ with Parkinson’s.

The service will initially be delivered to 150 patients in Plymouth city, West Devon and East Cornwall, as a pilot. If successful, the team hopes the system could be rolled out across the UK following the project’s completion in March 2020.

Project lead Dr Camille Carroll, Consultant Neurologist at University Hospitals Plymouth and Associate Professor at the University of Plymouth, said: “The UK prevalence of Parkinson’s disease will increase by a fifth by 2025, so the challenges associated with providing a timely and patient-centred service will also be much higher. To have this project off the ground with the involvement of partners and service users is fantastic, and having an advisor such as Professor Bas Bloem from Radboud University – an internationally-renowned Parkinson’s expert – will really help us to drive forward.

“We want to help people with Parkinson’s to live the best lives they can for as long as they can, and this project aims to empower patients to take control of their own condition.”

Parkinson’s patient John Whipps, from Looe in Cornwall, is taking part in the pilot and said: “I hadn’t seen a Parkinson’s specialist for over a year, and my symptoms were fluctuating. Something in the system needs to change and it’s great that steps like are being taken to raise awareness of the service problem. Hopefully the new service design will make life easier for others like myself living with the condition.”