A team of Plymouth patients are celebrating their achievements at the recent British Transplant Games, having won a mixture of gold, silver and bronze medals. 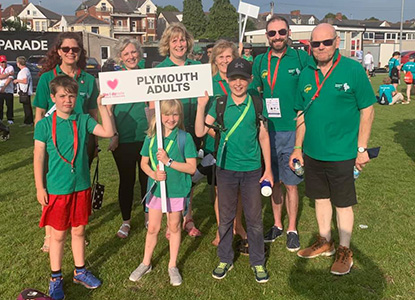 The Plymouth team, comprising of transplantees from both Devon and Cornwall, took part in the Westfield Health British Transplant Games held in Newport 25 to 28 July.

A number of patients representing the Plymouth team received their transplant operation and/or follow-up treatment at University Hospitals Plymouth NHS Trust. They include:

Plymouth’s team manager, John Wollington, said: “This is no ordinary sporting event as the competitors have all undergone life-saving transplants. The aim of the games is to promote the importance of organ donation, to encourage families to have the donation conversation and to show people that you can still lead a healthy and active lifestyle after a transplant.

“The team would like to thank the University Hospitals Plymouth Renal Department and Liver Unit, as well as Royal Cornwall Hospital, for their sponsorship.”

Linda Boorer, Transplant Nurse Consultant at Derriford Hospital, added: “On behalf of the South West Transplant Unit I would like to congratulate the team. It is an admirable achievement to take part in such an inspirational event.”