A grandad of ten from West Devon has said that being invited to take part in a clinical trial was the “luckiest day of his life” following an unexpected cancer diagnosis.

Seventy-three-year-old Fred Mead, a retired construction management consultant from Tinhay near Tavistock, was recently invited by his local GP practice, Tavyside, to take part in an innovative clinical trial investigating whether swallowing a special sponge can detect Barrett’s Oesophagus, a condition that can increase a person’s risk of developing oesophageal (food pipe) cancer. 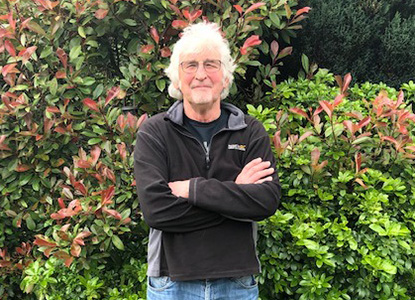 Two weeks after taking part in the Cancer Research UK-funded BEST3 Trial, which is supported by University Hospitals Plymouth NHS Trust, Fred and his wife Anita were given the unexpected news that he had cancer.

“I got a letter through the post from my GP practice telling me about the study about three months ago,” said Fred. “I’d taken part in another research study before and so I thought I’d give this one a go as it could help others in the future. We never dreamed for a minute that the test would show anything was wrong with me. I had no reason whatsoever to believe anything was wrong with me – I’m pretty active and do a lot physically. It never occurred to us that I could have cancer. My sole reason in doing the study was to help others.”

The BEST3 trial uses a Cytosponge - a cheap and simple test that can be done in a GP surgery instead of a referral to hospital for an endoscopy. Scientists are looking for signs of a condition called Barrett’s oesophagus which can develop in people who have regular symptoms of heartburn, acid reflux or indigestion. People with Barrett’s oesophagus have a slightly higher risk of developing oesophageal cancer so it is important to identify and monitor this group of patients to catch any early signs of cancer.

Fred was invited to take part in the study because he has been on a medication called omeprazole to reduce the side effects of heartburn and acid reflux for a number of years.

The Cytosponge test consists of a ‘sponge on a string’ pill and molecular test. When the pill is swallowed it expands into a small rough textured sponge in the stomach. The sponge is pulled back up collecting some of the cells lining the food pipe, which are sent off to the lab for a protein test.

“Swallowing the sponge itself was fine, “said Fred, a father of four. “It was slightly uncomfortable when they pull it back out but it didn’t choke me or anything – it was very quick and I thought nothing more of it. I was back at home within the hour.”

Within the two weeks that followed Fred’s appointment he received a call from a GP at Tavyside who told him the test had shown some abnormal cells and that he’d need to go to Addenbrooke’s Hospital in Cambridge, where the lead researchers are based, for an endoscopy and further tests.

“I was quite alarmed following that call,” said Fred. “I thought - surely not me?”

On April 24th Fred and Anita were seen by a specialist team in Cambridge who found Fred had a 1cm tumour in his oesophagus which would need removing.

“The doctor said that they had caught it very early,” said Fred.

“Once you’ve got over the shock that you’ve got cancer then that news is good news. I can’t imagine what situation I’d be in now if I hadn’t been invited to take part in that study. Six months from now and I think it almost certainly would have been a different story.

“I was so fortunate to have been given the opportunity to take part in the study – and to have received that letter. I’m very active, enjoying walking and sailing, and nothing has ever bothered me health wise. There would have been no reason for me to go to see my GP as I don’t suffer with anything - so lucky really doesn’t cut it. It’s just incredible. I don’t feel lucky to have cancer, but being invited to take part in the study was the luckiest day of my life.”

The trial is being supported locally by Dr Arun Ariyarathenam at University Hospitals Plymouth who operated on Fred on June 18th to remove the tumour.

“Dr Ariyarathenam and his team have been great”, said Fred.

“I’ve had to have a number of different scans and more endoscopies at Derriford Hospital as they needed to look at the tumour from all angles. The operation took between five to seven hours and they had to remove about three quarters of my oesophagus. We’ve been though the very upset stage and there are moments when you get a bit black about it but my life is very full and happy and I’ve got everything to fight for. We enjoy life – there is no option for us other than to get through this.”

The trial, led by the MRC Cancer Unit at the University of Cambridge and Cancer Research UK & King’s College London Cancer Prevention Trials Unit, first opened in Cambridgeshire in April 2017. The trial has finished recruiting with 13,000 patients enrolled and over 1,800 test patients seen in GP surgeries. The results will be published in early 2020.