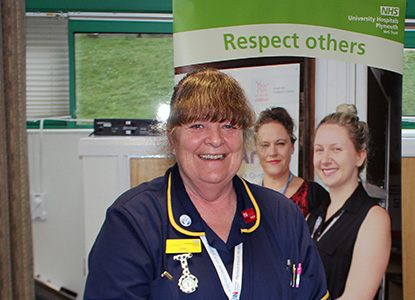 Vicky Brotherton, a senior sister in ophthalmology at Royal Eye Infirmary (REI) at Derriford Hospital, has received the RCN’s Safety Representative of the Year award.

Celebrating RCN representatives who have gone that extra mile to help their colleagues, the award is for those who have made a difference in their workplace and shown outstanding commitment to the RCN and its members. Nominees were nominated by a peer, and Vicky’s award demonstrates that she is an exceptional health and safety representative who has improved health and safety in her workplace.

Vicky became an RCN safety rep in 2016, having spent the previous two years as an RCN steward. Her mentor encouraged her to pursue the dual role when she realised that the roles would complement each other, so she enrolled in the Safety Reps’ module on the RCN learning and development pathway for representatives, which builds knowledge and skills.

She feels the role of Steward and Health &Safety rep complement each other and this is especially useful for supporting members’ health and wellbeing, something that is particularly important at the moment.

“I was very surprised and touched to be nominated by someone who I had supported in my roles as an RCN rep.” she said.

“I’ve known for ages and it’s been so hard not to tell everybody! It’s really nice for the work that I do as a health and safety rep to be recognised, because quite often members only actually think to contact stewards rather than safety reps.

“Nursing staff don’t always realise just how much we can input into supporting them so it’s great to have the profile of the role raised and it’s an amazing surprise to be recognised for the work I undertake as a health and safety rep. I’d like to thank my mentor for telling me to go for the role and I’d especially like to thank my nominator for taking the time to complete the nomination form on top of her busy role.”