Nobody wants their children to have a stay in hospital, and that’s particularly true during the festive season, when families long to spend time at home together.

But some young patients and their families had a surprise this week when members of Plymouth Argyle Football Club turned up, ready to kick-off some Christmas cheer. 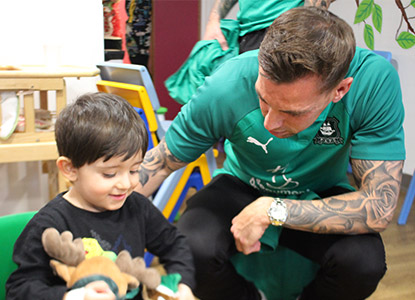 Manager Ryan Lowe, coaches, and members of the men’s and ladies’ squads brought gifts and played with younger children, bringing giggles and joy to the wards.

Lowe, said: “There are a lot of kids who aren’t at home around Christmas time so it’s nice for the club to come up here to visit and bring some toys. We’ve brought some teddies, pencil cases and other gifts which will hopefully put a smile on their faces before Christmas” 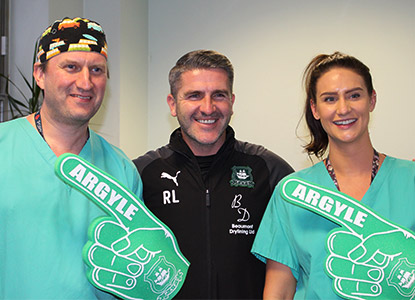 The green army made their way around the day rooms and play rooms of Woodcook, Wildgoose, the Children and Young People’ High Dependency Unit and Plym Children & Young Peoples Theatre, bringing as many smiles to parents, carers and staff as they did to the young patients.

They were warmly welcomed by Play Service Team Leader Sue Rodgers, along with several fans among the Derriford staff. She said: “We’re extremely grateful that Argyle continues to visit each year, as it’s a great distraction from what can be a difficult time for children and their families and it’s a real highlight of their day.” 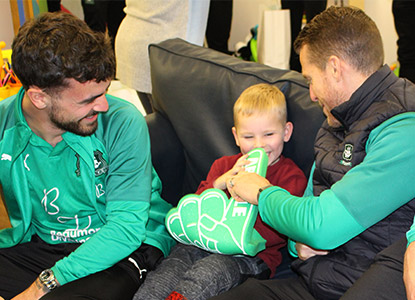 Katie Middleton is both captain of Plymouth Argyle Ladies team and a Physiotherapist at the Trust. She added: “We’ve been up to the children’s wards where I spend a lot of time working as a Children’s Physio. It’s nice to be on the flip side and spend a bit of time here in another role and hopefully bring a bit of Christmas cheer to the patients.”