11 patients from Plymouth have been awarded medals which recognise people living with type 1 diabetes for between 50 and 70 years.

A selection of medals are awarded by University Hospitals Plymouth and Diabetes UK to patients in recognition of the courage and perseverance that comes with living with diabetes for over 50, 60 and 70 years. The medals each represent one of the founding fathers of Diabetes UK.

The Alan Nabarro medal - for 50 years of living with diabetes

Alan Nabarro’s family was told he had diabetes in 1921 when he was seven years old. At this time most children did not live more than a year following diagnosis. Fortunately, insulin was discovered in 1923 and he was able to successfully manage his condition over the following 55 years. He spent his career fighting discrimination for people living with diabetes.

In the 1970s, Alan was one of the longest living people with diabetes up to that time. After his death, the British Diabetic Association decided to honour his memory with the inauguration of the Alan Nabarro Medal.

The Robert Lawrence Medal – for 60 years of living with diabetes

Dr Robert Daniel Lawrence was an aspiring surgeon at King’s College Hospital in London when he was diagnosed with type 1 diabetes at the age of 28.

He tried to control his diabetes with a strict diet but his health deteriorated over the next three years and he was not expected to survive. However, his life was saved by a momentous medical breakthrough: the discovery of insulin. 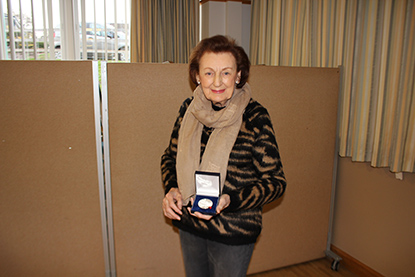 Lucky to be alive, Dr Lawrence devoted the rest of his long, productive professional life to the improvement of care and treatment of other people with diabetes with whom he shared an empathy and understanding.

The Robert Lawrence medal was presented to: Pamela Uren and Sharman Jones

Recipient of the RD Lawrence, Sharman Jones spoke about her experience living with diabetes.

“I was diagnosed when I was four year’s old,” said Sharman. “I remember my mother giving me insulin injections as a child and it was awful, though I was quite fortunate 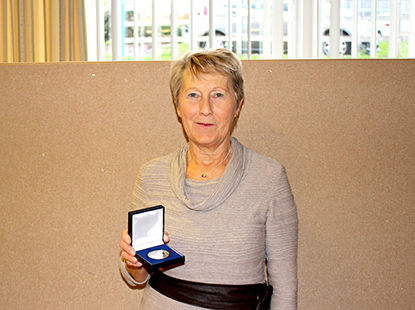 that she was a nurse and taught me how to administer them myself as I got older.

“I never did as I was told when I was young and I was very active so I did have a few hospital visits due to hypoglycaemia.

“I have to count the amount of carbs I eat every day so it’s a constant pressure. I’d love a few days off but you can’t. I try to avoid fatty food and I exercise every day; I find that’s what works best for me.”

“As an adult it’s been difficult to manage. I was on five or six injections every day. I have an insulin pump now and it’s changed my life.”

Upon receiving her medal, Sharman said: “I would just like to say thank you to the wonderful members of staff who have looked after me over the years.”

The John Macleod medal – for 70 years living with diabetes 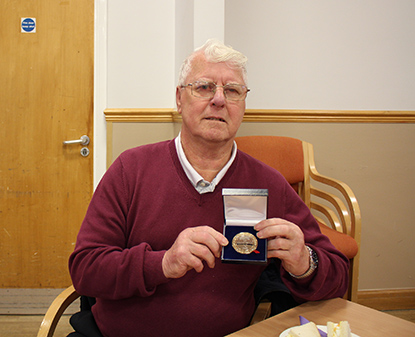 John Macleod was renowned for his work on carbohydrate metabolism. Macleod was in the team that investigated the effect of intravenous injection of degenerated pancreas into diabetic dogs. This led to the discovery of insulin for which he was awarded the Nobel Prize along with his colleague, Frederick Banting.

Type 1 diabetes causes the level of glucose in your blood to become too high. This happens when your body can’t produce enough insulin, which controls blood glucose. People with type 1 diabetes can now manage this with a daily insulin injection. Prior to this a strict low-calorie, no carbohydrate diet was the only effective treatment for diabetes, seeing some patients consuming as little as 500 calories per day.

The John Macleod medal was presented to: Mr James Parker