A gentleman’s life was saved by a midwife and two junior doctors, who happened to be nearby, at Tavistock Pannier Market last month. Together they performed a Christmas miracle and brought him back to life after his heart had stopped beating. 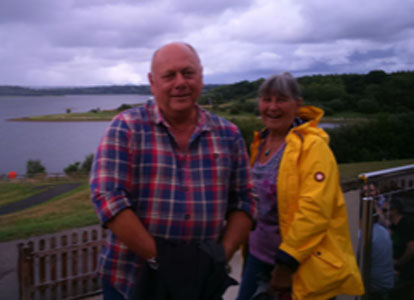 On Saturday 13 November John Elliott, who lives in Topsham, had travelled down to Tavistock with his wife Marlene to do some Christmas shopping. Just outside of the Pannier Market, John suddenly began to feel unwell and sat down on a nearby bench.

At that moment Sheree Haydon, a midwife at University Hospitals Plymouth, was enjoying some fresh air off-duty, taking her dog for a walk with her partner, when John caught her eye. Sheree decided to approach him to see if he was okay and just as she did, he collapsed on the floor and his heart stopped completely.

Instinct took over and Sheree shouted for help, laying him in position and checking his vital signs. Thankfully Paolo Ledesma, a junior doctor who has just started working at Derriford Hospital in Obstetrics and Gynaecology, and his girlfriend December Payne, a junior doctor at Torbay Hospital, also happened to be at the market that day and came running to help. December placed her coat under John’s head and together the three performed CPR, taking it in turns to administer chest compressions, while a passer-by fetched a defibrillator.

Then, just as they were about to shock him, John suddenly took an almighty gasp and came to, shortly before an ambulance arrived.

“It was such a shock – we’d attached the defibrillator pads and were just about to hit the button, when John suddenly started to breathe,” explains Sheree. “I covered him with my coat and explained to him what had happened, and asked someone to fetch his terrified wife a coffee.”

“There’s no doubt they saved my life, big time,” explains John. “If Sheree hadn’t spotted me and decided to come over, and if she hadn’t called for help and given me chest compressions together with the doctors, there’s no doubt at all – I wouldn’t still be here today. I take my hat off to all three of them and want to say a massive thank you from the bottom of my heart.” 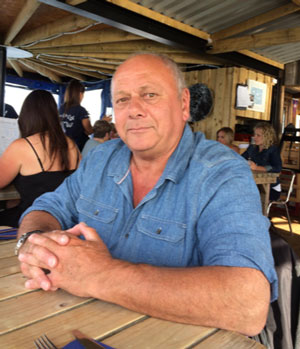 As John was loaded into the ambulance, the impact of Sheree’s actions started to sink in, and she found herself in tears. “I’m a big believer in fate and I’m just so glad I happened to be in the right place at the right time,” she said.

John had suffered a cardiac arrest and, despite no history of heart problems, had a further attack during the ambulance journey. Thankfully, after having two stents fitted and spending two weeks recovering at Derriford Hospital, John is now home to spend Christmas with his family.

The day after her father’s life was saved, Cory Elliott managed to track Sheree down via social media to send her a message of thanks. “As a former firefighter, my Dad saved so many people’s lives, and it is such a special thing that now his life has been saved too,” she said. “All three of them categorically saved his life and we cannot thank them enough. We will be forever in their debt.”

Incredibly modest, Sheree adds: “There’s no recognition needed. I did what anyone else would have done in that moment. It was such a surreal moment though as I don’t normally work with male patients in my role!”

Helen Harling, Maternity Matron for Inpatient Services, said: “It’s such lovely news and makes me incredibly proud of the team we work with. I’m incredibly proud of Sheree and her prompt action in this situation – she definitely deserves recognition.”

December said: “When we heard what was happening we immediately went to help and did what anyone in that situation would do – used the skills we had. We recognised John was in cardiac arrest and began CPR, thankfully that worked and he started to breathe before we shocked him! It was an incredible team effort and I am so pleased to know John will be home with his family for Christmas. I have often thought about him since that day.”

Paulo said: “I think we did what any health professional in our position would have done. All being as junior as we were, it was scary trying to manage it without anyone more senior around for the first time. We just concentrated on managing it the right way so the shock of it all didn’t hit us until after John was taken away by the ambulance. It must have been a massive ordeal for his wife and family, so I’m really pleased he was able to go home well in time for Christmas.”

Pictured below from left to right: Sheree; Paolo and December; John with his family. 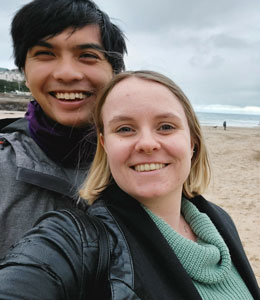 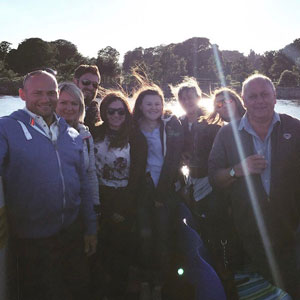