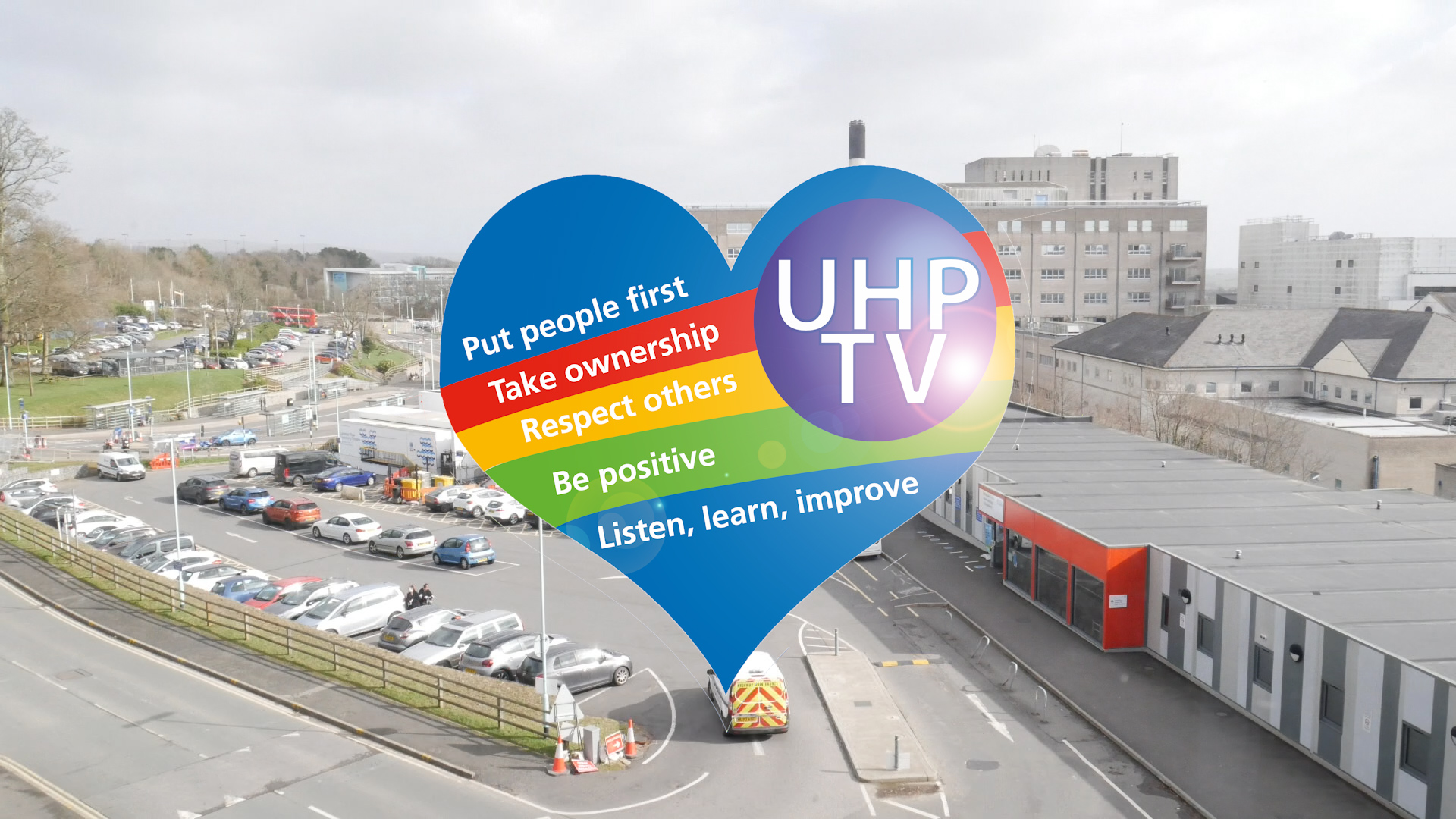 To coincide with Bowel Cancer Awareness Month, University Hospitals Plymouth released its first episode of UHP TV which focused on the innovative use of robotics in surgery.

As part of the programme, 72-year-old Clive Horsnell returned to the operating theatre to thank Consultant Colorectal Surgeon, Sebastian Smolarek, for his life-saving surgery. Filmed in Freedom Theatres, one of Derriford Hospital's 38 theatres, Clive talked about his experience and fast recovery.

He said: “The symptom I was getting was constipation. I was forcing myself to go to the loo and then I was seeing clots of blood. Because I saw the advert on the television that told you that if you see blood to contact your GP, I contacted my GP at Stoke Surgery straight away. 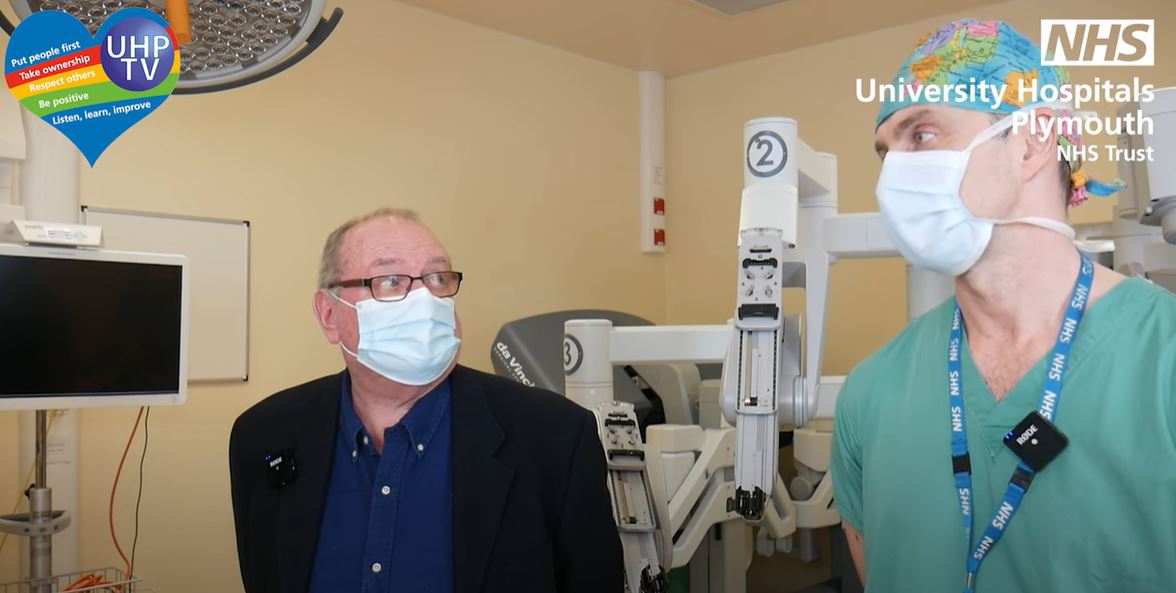 “By the end of the week I was having a colonoscopy. It was all very quick. I was told right away that I had the cancer. They brought my wife in and sat her down, so she was a little bit concerned. But really I knew there was something wrong and I just had to accept it and put my hands into the professionals to sort it out.

“I was in within a couple of weeks for scans. I met Dr Smolarek and that was when my mind was really put at ease. He explained the operation and I literally came in the following day. I met him at the entrance to the operating theatre, we did the consent form and then Seb went off to get scrubbed up. I went to get myself ready, next thing I knew I was in with the anaesthetist. They put a mask on my face and that's the last thing I knew.

“The day after the operation I was into the chair sat up, and then I was walking around the following day. I came in on the Friday and went home on the Tuesday morning. It was that quick. And of course, it felt a bit strange at first and my mobility was a little bit slow, but I recovered within a few weeks.”

“I lost my mum when I was 18 with a tumour on the brain. I've got four sisters and all of them had cancer. Also, my son has had testicular cancer, so I thought I was the odd one out. So, when I heard the news, I thought ‘well that's it’.

“And I can now get on with my life. You're in the hands of these wonderful people here. It was explained to me in detail about this robotic machine and what it does and I'm the proof of the pudding. I had five or six holes in my tummy, I haven't been opened up and they've done everything inside. The recovery time is so quick, everything was done so quickly and efficiently. And then I was back in again in January just to confirm that everything went well. I've had the ‘all clear’.” 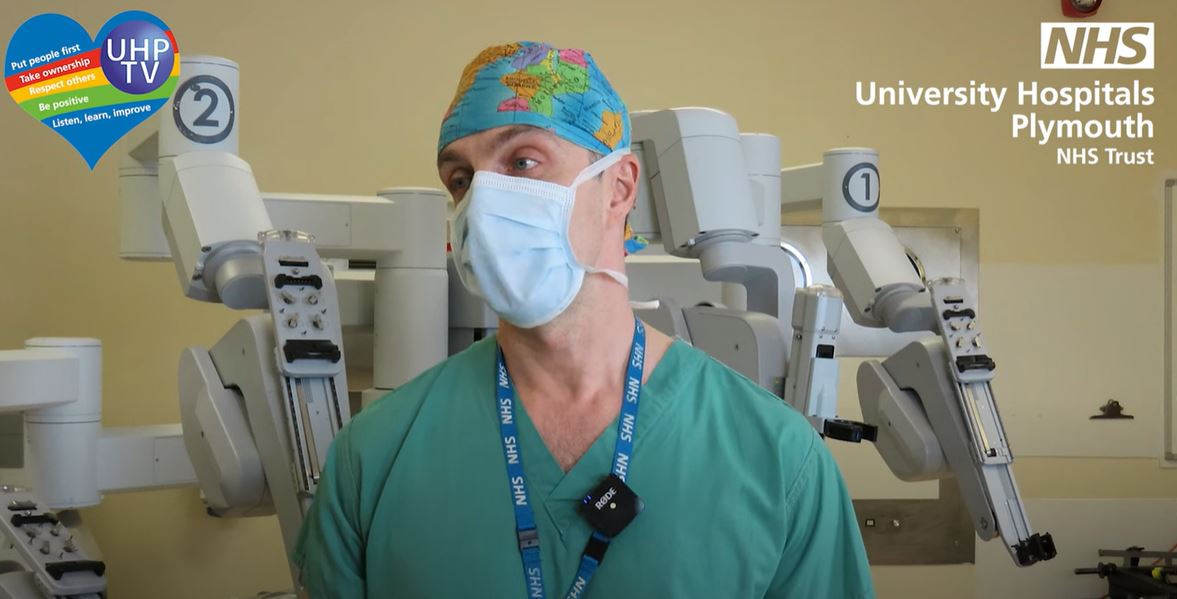 Consultant surgeon Sebastian said: “We started using robotics in 2020 with the first three cases, and so far, we've done 60 cases. The robot has a three-dimensional view, we have a multiple dimension movement of the arms which creates a better and stable platform to do the operation. In addition, the patient has less blood loss less pain. Patients are able to mobilise faster and come back to their normal activities very fast. We know from our data that it also cuts the length of stay in hospital for our patients.”

Mark Coleman, Consultant Colorectal Surgeon at University Hospitals Plymouth and chairman of Bowel Cancer West said: “Bowel cancer is unfortunately quite a common condition in our community, particularly affecting in most cases older people but it can also affect people of any adult age.

“It’s seen equally in men and women and we see patients that are coming who are concerned about symptoms like having blood in their poo, and changes to their normal bowel habit, or any other concerns like abdominal pains or weight loss.

“There's a very good two-week wait pathway between your general practitioner and the hospital to make sure that patients are seen and investigated in a timely way. It's important to know that early recognition of symptoms, early investigation, early treatment is really important.

“The message I want to give to patients who are worried about this, or may have just been diagnosed, is in many cases it's a curable condition with the right treatment and so they can get back to their normal lives. Many people also fear and worry about having to have a bag on their tummy otherwise known as a stoma and actually most of our patients never end up in that situation. So, get to your doctor early, get seen, get investigated get treated as soon as possible.”