An amputee patient who received treatment from University Hospitals Plymouth NHS Trust (UHP) will be taking on the 2022 GB Row Challenge with her team, Sealegs, in June.

Sophie Harris was born three months premature with talipes equinovarus, otherwise known as clubfoot. As a child she had received a mixture of medical interventions, however in 2010 arthritis had set in alongside the beginning of complex regional pain syndrome which causes persistent severe and debilitating pain.

It was then, in 2011, that Sophie started receiving orthopaedic treatment at UHP where she was under the care of Orthopaedic Consultant Mr Metcalfe. 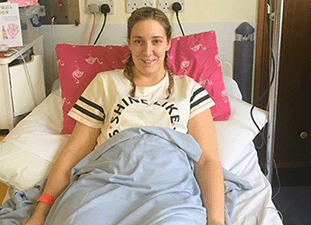 “My time under the care of Mr Metcalfe was second to none - I felt listened to and that everything would be okay. I’d had some not so good experiences as a child, and this played on my mind.

“I remember attending the children’s unit for one of my initial assessments. At the age of 26 some would think that was weird, but it made sense as I have a birth defect.”

Despite undergoing a number of surgeries and preservation measures, everyday remained a struggle for Sophie as she continuously underwent rehabilitation. After years of treatment, Sophie came to a joint decision with her orthopaedic team to amputate her leg below the knee in February 2017.

“I remember that when I was applying to become a student nurse the team in outpatients said they’d happily work alongside me which was really humbling especially as they knew me as a patient. I recognised that they too liked a challenge just as much as I do.

“I was told I couldn’t pursue my nursing as I wasn’t declared fit pre amputation. However, it’s ironic as fast forward and I’m now a sports injury rehabilitation therapist and progressing onto my MSc in physiotherapy.”

Always up for a challenge, one month before she was due to have her amputation Sophie decided to take up rowing. Now, she has chosen to take on one of her biggest challenges yet, the 2022 GB Row Challenge where teams race for over 2000 miles around the coast of Great Britain.

“I didn’t expect to like rowing and I didn’t think I’d even be able to do it again. However, I loved it. I was fortunate enough to be given a chance within the GB paralympic development squad despite never having rowed before.”

“I decided to take on this challenge because I feel like I need to prove that anyone can if you set your mind to it, believe in it, and take it for what it is. I told myself when I was 32 that my life had started over and I’m certainly going to live it as best I can while I can because no day is the same.”

While racing with her team, Sealegs, Sophie hopes to secure a world record for being the first amputee to take on the challenge, acting as a role model for her daughter, “I’d like my daughter to know that it’s ok to be different and to stand out from a crowd, irrespective of your grass roots. I stand by “I can, you can, we can”.”

Beginning on 12 June, the team will set off from London and take it in turns to continuously row throughout what has been described as the ‘world’s toughest rowing race’.

“This challenge of rowing around Great Britain is a huge undertaking and I wouldn’t be able to do it without the expertise of Dorset Orthopaedic who have custom made my rowing prosthetic for almost four years. 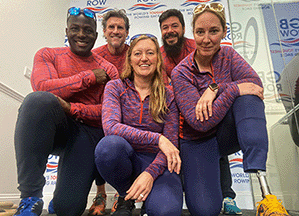 “Having a good support network and trust with your medical team is also so important.  The care I received as an inpatient from all of the staff at UHP, especially Stannon and Sharp wards at Derriford, was incredible and there were some pretty tough times.”

You can find more information about Sophie and the rest the Sealeg team’s journey on Facebook.