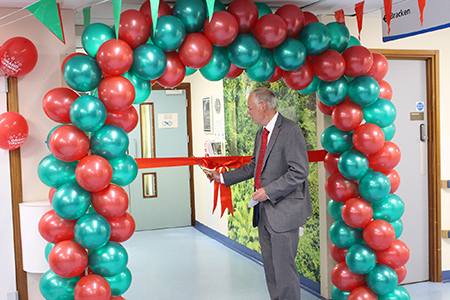 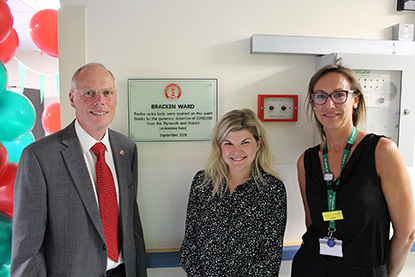 Bracken Ward has undergone a 12-bed expansion thanks to the generosity of the Plymouth and District Leukaemia Fund (PDLF).

“We are enormously grateful to PDLF for the very generous donation it has made to Bracken ward,” said Sarah.

“It has made such a difference to patients, carers and staff and we are hugely appreciative of all their on-going support to the department.”

The money was raised through a combination of donations, fundraising events, memorials and legacies over the years.  Director of PDLF and retired Trust consultant, Adrian Copplestone, thanked the many thousands of people who have donated to the fund since its inception in 1983. Adrian paid special tribute to Tavistock Rotary Club and to fundraising skydivers from Whitchurch Julie Williams and Graham Parker who presented a last minute donation of £1,300.

“PDLF is very pleased to contribute £200,000 to the new Bracken Ward expansion,” said Adrian. “This will enable all the Haematology patients to be looked after on the same ward, by the specialist and excellent nursing and medical teams.  I’m sure this will make a huge difference to the patients and their families.

“I would like to take this opportunity to thank all the many people who have kindly donated time or money to PDLF over the years.  It is due their generosity that it is possible for PDLF to help in this way.”

PDLF was set up to enable patients with leukaemia or related disorders receive the best treatments locally, by providing facilities and equipment. Since 1983 PDLF has raised £1.9 million which has helped with the setup of stem cell transplantation and molecular biology in Derriford.  It has also funded research locally into various forms of leukaemia.