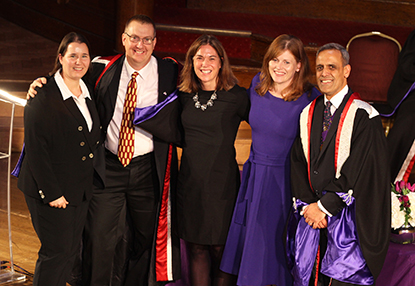 The Emergency Department (ED) team at University Hospitals Plymouth have been named runner up at the Royal College of Emergency Medicine awards (RCEM).

The team attended an award ceremony in December where they were announced as runner up in the fiercely contested category, ‘Clinical Team of the Year’. They were recognised for their approach to the wellbeing of staff, innovative solutions to clinical problems on the shop floor and commitment to research alongside day-to-day practice.

A wealth of wellbeing initiatives have been introduced, including camping weekends with activities such as yoga and art workshops. At Christmas, the team saw their all male ballet troupe performing Swan Lake and female street-dance team entertaining staff at a charity event, supported by the ED choir and ED band.

Alongside the focus on staff wellbeing, the clinical team have also been implementing various quality improvement and safety initiatives, including the Front-Loaded Initiation Care (FLIC) model. The model focuses on early senior clinical input which facilitates early identification of likely pathologies, initiation of treatment and fast-track referrals. The department was also recognised for its contribution to research at a national level.

“The RCEM showcase the fantastic work and patient-centred care being delivered in emergency departments across the country,” said Dr Taj Hassan, President of the Royal College of Emergence Medicine.

“It is important to recognise and celebrate the achievements of emergency department staff who go above and beyond for patients and colleagues every single day of the week.”

Consultant in Emergency Medicine, Beth Newstead, said: “We are delighted and very proud to have won this award which is down to the hard-work and dedication of every single member of our team.”