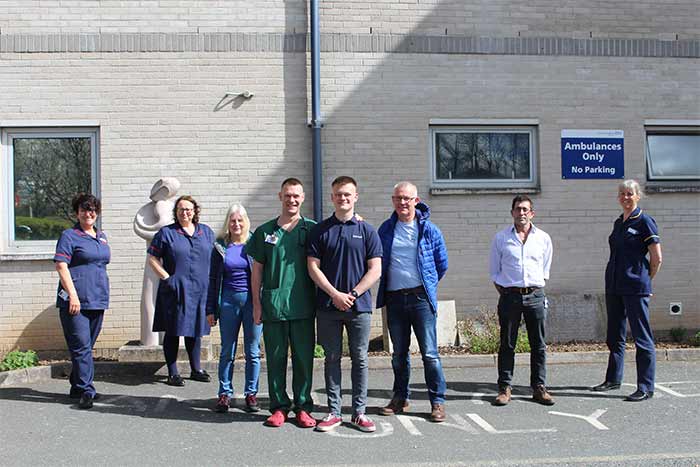 Tom Rowe, who was born prematurely in April 2004, was treated by NICU staff before being allowed home a few months later. Going full circle, his brother, Dr James Rowe, has just completed a placement within the NICU and invited Tom in to say thank you for the support and care their family had received.

James said, “I especially want to thank all of the staff on NICU and Transitional Care Ward for welcoming me to such an amazing team, it really has been an honour to work with everyone. NICU has had such a positive impact for my family with Tom being a patient there and it’s really special to come full circle and work here too.”

Tom, who now works as an apprentice at Babcock, spent two months in the NICU at Derriford after being born at 30 weeks gestation which is 10 weeks preterm. His mum, Ann-Marie spoke about how she is grateful for the care her family received during that time. “It was a scary time, but all of the staff were there for each one of us. Every step of the way we felt safe and cared for; part of the NICU family. We cannot thank them enough”.

Tom’s return to the unit was made extra special as he was joined by staff from the department who cared for him and supported his family all those years ago. Neonatal Nurse Consultant, Roisin McKeon-Carter said, “it is a privilege to care for preterm babies and their families. Neonatal services is a special place to work and many of the staff who cared for Tom 18 years ago are still working here today, including his consultant neonatologist, Dr John Madar, Matron Katie Hoffman and Outreach Sensor Sister Jo Bennet. It is lovely to see the fruits of our labour in Tom, a healthy 18 year old who is starting out on his career in Babcock."

Roisin contiued, "NICU is one of the best places to be a nurse and doctor in Derriford and we are delighted that Tom’s big brother was inspired at the age of seven to become a doctor and care for preterm babies and their families. I call it succession planning.”