Six years after suffering a brain injury that resulted in a stroke and right sided paralysis, Eleanor Blackburn is sharing her story through performance.

In November 2015, Eleanor was hit by a pushbike while crossing a road in her university town of Falmouth. The accident resulted in a subdural hematoma – a bleed on the brain – that led to a stroke. Now, over six years on she has written and performed a solo show telling her story, Subdural Hematoma. 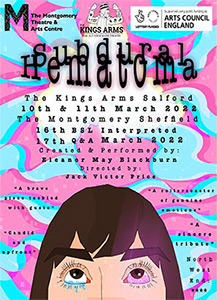 Eleanor was initially taken to Treliske Hospital in Truro after her accident, however due to the severity of her injuries she was transferred to Derriford Hospital in Plymouth. Her parents were told to expect the worse and Eleanor was rushed into surgery before being put into an induced coma, requiring a tracheostomy and a feeding tube.

Once out of her coma, Eleanor woke up very gradually, without any knowledge of how poorly she had been. She was unable to talk or eat and had limited use of her right side as the stroke had caused right sided weakness. Struggling to come to terms with her injuries she spent most of her days asleep or crying.

However, Eleanor is grateful for the staff that took care of her. “If it wasn't for the amazing staff at Derriford I definitely wouldn't be here. I have vague memories of them gently washing me and saying sorry sweetheart while they poked me to see if I was waking up.”

During Eleanor’s time in hospital, her mum kept a diary of her experience. Reflecting on her stay, Eleanor said, “I don’t remember any of the time I was in a coma, but I dreamt of my dad’s voice and found out he had been reading to me a great deal in this time.” Eleanor then left Derriford just before Christmas of 2015. She was flown to a hospital in Sheffield where she stayed for a further two months.

Now home and recovering, her hair, which was shaved for the operation, began to grow back and she was learning how to speak again. She also started hydrotherapy, occupational therapy, and speech therapy. Then, just a few months after getting out of hospital, Eleanor returned to university to study Acting.

Despite suffering with the effects of her injury, experiencing extreme tiredness, weakness in her right side and dizzy spells, Eleanor graduated just a year later than planned. “My hair was still growing back, and I would go for naps in the middle of lessons in a space they kept aside for me in the library with a comfy chair and pillows and a blanket.”

She discovered a passion for spoken word at university and her tutor, Dr Misri Dey, challenged her to create a comedic show for her 10 minute solo assessment. “I wrote a little spoken word based on the accident and everyone in my class urged me to write more, and so Subdural Hematoma was born. It felt right combining something so tragic but ultimately uplifting with comedy.”

“I wanted people to hear my story as I think we can all relate to the resilience and the love for those around us in difficult situations. My main feedback from those who saw the scratch piece was that they wanted to hear more from my family and friends, so I knew what to do, make it their story too. It very much is this now. Its several people’s journeys using spoken word, mask, verbatim, recordings, testimonials and physical theatre.”

Eleanor debuted Subdural Hematoma at the Manchester Fringe festival in 2021 where the show was described as “compelling”, “brave” and a “heroic must-see”. Further performances, which hospital staff have been invited to attend, are scheduled in Salford on 10 & 11 March and Sheffield on 16 & 17 March.

“The staff were so wonderful and on the whole, I had a very positive experience. I would be honoured if anyone from the hospitals could attend as I am very grateful for all they did for me and want to prove how much of a positive impact it had on my life.”

To see more information about these shows visit: https://www.facebook.com/Subdural-Hematoma-108504614796357