A former patient who received treatment from the dermatology department at University Hospitals Plymouth NHS Trust is gifting an apple tree to say thank you for the care they received. 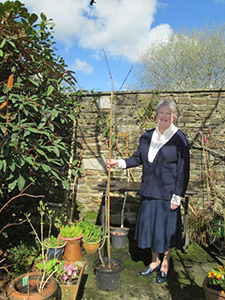 Celia Steven, who received treatment for breast cancer at Derriford Hospital, is one of two horticulturists responsible for a new variety of apple tree, the Pilgrim 400. She decided to donate one of these rare trees to the Trust as a thank you to the team, where it will be planted outside Rowan House, where the dermatology team are based.

This variety of tree was specially chosen by Celia, who is the great granddaughter of Henry Mayweather, who introduced the Bramley apple commercially, and fellow horticulturist, John Stirland, back in 2015 after the two decided on propagating a new apple variety to commemorate the Mayflower 400 anniversary.

“It is a pleasure to give this tree to the hospital, and I hope it helps the staff at Rowan House”, she said.

“Their help and kindness a short while ago meant that yet again my problems were dealt with and are now healing well. Having had breast cancer, and over my other two visits, the last one being a mastectomy, I can only say again that it was all dealt with kindness, and positive results.

“When the Mayflower commemoration was publicised, a friend and radio gardener for the BBC, John Stirland, and I came up with the idea of finding a new apple and naming it Pilgrim 400. It took about four years to get it registered once we had found an unnamed apple, and we then had some grown by a local nursery at Milton Abbot. I thought it would be a perfect gift for a hospital of renown that does so much for so many people in these difficult times.

“This historic tree is a small thank you from a very grateful patient and being an apple, it makes sense to have it planted on National Apple Day.”

These rare apple trees are being planted in locations significant to the Mayflower story and this donation allows the site at Derriford Hospital to be part of that historical legacy. In addition, the tree is being planted during the Queen’s Green Canopy event which is encouraging people and organisations across the United Kingdom to ‘Plant a Tree for the Jubilee’.

Planting will take place outside Rowan House at 10:00 on National Apple Day which takes place on the 21 October.

For more information on the Pilgrim 400 apple visit https://www.pilgrim400.co.uk/index.html.

Watch the planting of the tree below: