A series of studies conducted by consultants at University Hospitals Plymouth NHS Trust have revealed that not only are patients who become trapped when involved in a car accident more likely to die, but that there are also significant differences in injuries sustained according to age and sex.

Motor vehicle collisions (MVCs) are the second most common cause of major trauma in the UK. Worldwide, they are a significant cause of morbidity and mortality, accounting for 1.35 million deaths per annum. Patients who remain within their vehicle following an incident and cannot leave without assistance are considered to be ‘trapped’. 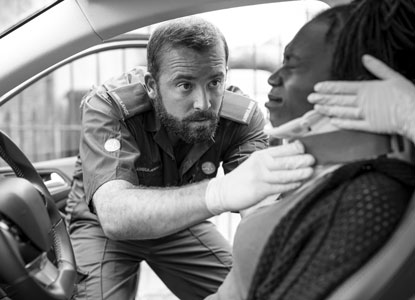 Professor Tim Nutbeam, Emergency Medicine Consultant, has authored a series of papers in collaboration with colleagues across a number of organisations*, on studies utilising the Trauma Audit Research Network (TARN) database, thanks to funding received by the Road Safety Trust. These studies are the largest analysis to-date of trapped patients injured in MVCs, which has allowed comparison of injury severity, injury type and outcomes for patients, stratified by age and gender. The studies have also allowed, for the first time, the identification and comparison of differences between men and women in terms of injury patterns and the likelihood of becoming trapped after a collision.

According to the results of the first paper, patients who are trapped after a MVC have a higher severity of injuries and are more likely to die than those who are not trapped. Of the 63,625 cases studied, nearly 11% of patients were trapped in their vehicles after an accident. Trapped patients often had significant blood loss and were more likely to have time-critical injuries. However, spinal cord injuries proved to be rare, only affecting 0.7% of all extrications.

“For years, the approach to handling patients following a MVC has been the principle of movement minimisation and mitigation, to prevent secondary spinal injury,” explains Tim, who is also an Honorary Professor at the University of Plymouth and lead doctor with the Devon Air Ambulance. “But this method is time-consuming, and patients may have time-critical injuries. When considering the frequency, type and severity of injuries reported here, the benefit of movement minimisation may be outweighed by the additional time taken for extrication. In other words, it could prove to be harmful for the other 99.3% of patients, who do not have a spinal injury, to spend unnecessary time trapped in their car.”

The second paper published by Tim and his colleagues demonstrates that older patients are more likely to become trapped in their cars, and in particular, those aged over 80 are more likely to die if trapped. Although chest and spinal injuries are more common in older patients (with head, abdominal and limb injuries more common in younger patients), the overall rate of spinal injuries for all age groups remains low, providing evidence that minimising entrapment time could help to reduce mortality and improve patient outcomes.

In the final paper of this initial series, the results show that although men are more likely to be involved in serious crashes and admitted to hospital, women were more frequently trapped in their cars (16% of women vs 9% of men). Potential reasons for this include that women are more likely to sit closer to the steering wheel, increasing the likelihood of becoming trapped. Female patients are also biologically prone to certain types of injury – for instance, women have different pelvic anatomy which may make them more susceptible to pelvic injuries, which may trap them in their vehicles.

The paper also makes the case that the safety features incorporated in modern cars are less likely to be effective for women. Current mandatory crash testing uses a scaled down male mannequin to represent females and are not modelled to account for anthropometric differences between men and women. Safety systems are therefore likely to be more effective for men than for women.

“We are hopeful that the findings in these papers will strengthen demands for more biologically accurate crash test dummies to investigate impact collisions on women,” adds Tim. “In particular, the sex-disaggregated data may help vehicle manufacturers, road safety organisations and emergency services to tailor responses with the aim of equitable outcomes by targeting equal performance of safety measures and reducing excessive risk to one sex or gender.

“Most importantly, we hope our work will help to save lives.”

Tim and his colleagues will shortly be publishing further research looking into the extrication techniques for people trapped after MVCs. This work has also been funded by the Road Safety Trust, who are dedicated to achieving zero deaths and serious injuries on UK roads.

Nutbeam, T. et al. A comparison of the demographics, injury patterns and outcome data for patients injured in motor vehicle collisions who are trapped compared to those patients who are not trapped. Scand J Trauma Resusc Emerg Medicine 29, 17 (2021). https://sjtrem.biomedcentral.com/articles/10.1186/s13049-020-00818-6