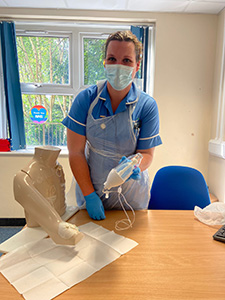 An accufuser is a pump that allows the antibiotics to be given over a 24 hour period rather than three times a day. Currently these pumps are being used by the Urgent Care Nursing Service (UCNS) in Plymouth and the surrounding area to give patients IV antibiotics at home keeping patients more comfortable and freeing up hospital beds.

The use of accufusers commenced on 07 February 2022 after almost a year of planning. The treatment is overseen by the UCNS which is a partnership between UHP and Livewell Southwest. Staff members who have used the accufusers have reported overwhelming positive feedback and have noted that they enjoy using the devices.

This feedback has been echoed by the patients. So far six patients have received treatment in this way and have commented on the freedom it gives them, as well as feeling like their have more involvement and control over their treatment.

“The service I received over a 6 week period was exceptional, every nurse was thoroughly professional but also very friendly, always checking how I was feeling and asking about my progress. The nurses are a credit to the Trust.”

“I have been very impressed with the care, the abilities and the knowledge of the nurses. Very mature people giving a great service to the community while saving beds for hospitals.”

“Cheerful, prompt and caring team who knew exactly what they were doing. We had utter confidence in them.”

While it is hoped that accufusers can be used in the future to deliver different medications, the service is just part of UHP’s initiative to work in more virtual ways supporting patients to be treated from home rather than in hospital.

UHP and Livewell Southwest are exploring the possibility of developing Virtual Wards which often include both face-to-face treatments from multi-disciplinary teams as well as the use of technology such as remote monitoring using apps, wearables and other medical devices to monitor and treat patients. Not only does this benefit the patient who receives the best care from the comfort and safety of their homes, but it allows more space for additional patients to be treated within the hospital.