In 2017, Peter Barnwell was diagnosed with bladder cancer in the form of CIS (Carcinoma in situ).  Over the next couple of years, he had many courses of treatment delivered at the Chestnut Unit at University Hospitals Plymouth.  Unfortunately, in January 2020 Peter had to undergo a Radical Cystectomy to remove his bladder and prostate.  Despite being very concerned about the effect this could have on his lifestyle, the alternative was far worse.  The operation went well, followed by a quick recovery, and within three months he was leading a normal life – or as normal as Covid would permit.

When asked about his decision to train and run for the London Marathon, Peter humbly explains, “I wanted to show that life does go on with a good quality after the operation and wanted to reflect on how well everyone at the Chestnut Unit had supported me.  Particularly my surgeon Paul Hunter-Campbell.  So, I entered for the London Marathon which I had run five times before.  But, I was now 77 with a urostomy bag.  I completed the course with no problems apart from a couple of upset toenails.  It was slow but the bag and my personal plumbing gave me no problems at all.  A great day and it shows what can be done…  never again though.”

He did this to show that life doesn’t end with a urostomy bag and indeed having the operation has changed his life for the better. Peter reflects, “I am eternally grateful to all the staff at Derriford Hospital, Plymouth who were all superb.  The only black mark was that three days after the operation the pudding I was given was Spotted Dick!”

Peter would like to thank all his sponsors for their support.  As a result, he has raised an impressive £10,600 for Cancer Research UK.

The photos below show him before the start of the marathon, at 25 mile-mark and lastly in the bar after the finish line. 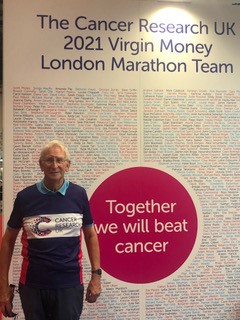 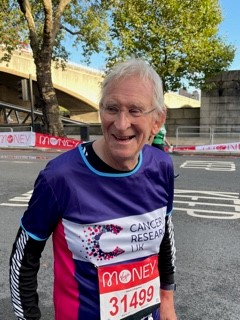 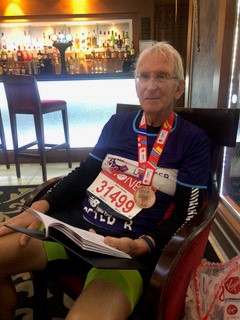