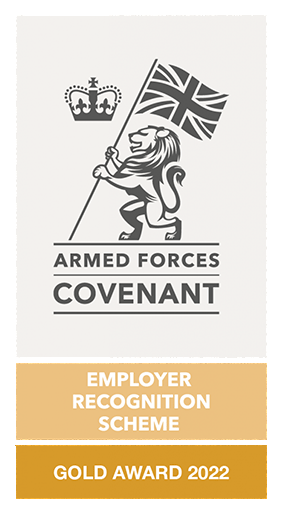 The award, which is valid for five years, represents the highest badge of honour for organisations that employ and support those who serve and those who have served, as well as their families.

Located in Plymouth, a city with a strong military tradition, UHP plays host to the Joint Hospital Group South West which employs a tri-service staff of nearly 200 military doctors, nurses and allied health professionals who are integrated fully into UHP’s facilities.

To be nominated, organisations have to fulfil a certain set of criteria showing that they support these colleagues. Namely, organisations have to sign the Armed Forces Covenant – a pledge to support those involved with the Armed Forces. UHP did this back in 2017 when Chief Executive, Ann James, and Trust Chairman, Richard Crompton, were joined by representatives from the Ministry of Defence, 243 Field Hospital and Wessex RFCA who attended as witnesses.

At the time, Trust Chairman, Richard Crompton, said: “It’s a great privilege to have the opportunity to publicly demonstrate the importance of our relationship with the military and to be able to prove our commitment to them in this way”.

UHP was first awarded a bronze award back in 2017 before taking home silver in 2018. Now as a gold rated employer UHP has been invited to attend the Gold ERS event held at Britannia Royal Naval College Dartmouth in November. The ongoing improvement in this award demonstrates UHP’s dedication to supporting their Armed Forces colleagues and their families.