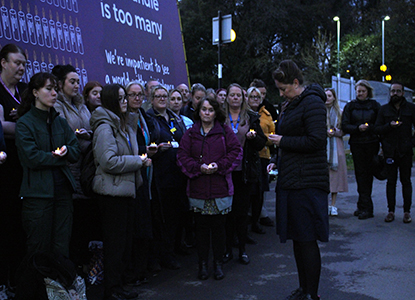 This is an international campaign originally launched by the Centre for Women’s Global Leadership in the United States calling for the prevention and elimination of violence against women and girls. It begins annually on November 25, the International Day for the Elimination of Violence against Women, and runs until Human Rights Day on December 10.

The UHP staff were given an electric tealight at their minute’s silence to pay respect to lives lost to domestic abuse.

The event took place in front of a campaign billboard in between Derriford Hospital’s main Outpatients building and the disabled car park.

Lisa Donaldson, UHP’s Senior Safeguarding Adult Nurse Advisor, said: “It’s important for us as a Trust to take part in this campaign because quite often, the only time that some people can be on their own is coming into the hospital. What we’re asking our key staff around the Trust to do is ask one important question, which is ‘do you feel safe at home?’

“And if every staff member asks that, when they see a patient or a relative, then they may help someone that’s been subjected to domestic abuse for many years. This could be their only opportunity to escape that situation.”

Lisa explained: “The campaign billboard we had has been placed at key partners across the city, including Plymouth Argyle and the Civic Centre, and we’ve got it here today until Friday, December 2. We’ve also got the hospital’s lights lit up in the colour orange for the next 16 days.

“Smeaton’s Tower in the city was also lit in orange and purple, to show that light can come from the event going forward if people disclose what’s happening to them.”

From November 30 until December 2, UHP also hosted several partner agencies on the level 6 concourse at Derriford Hospital. These partners and the Trust’s Safeguarding team provided information on the services available to support victims of domestic abuse and their families.

On November 29, Trust representatives attended the Plymouth Violence Against Women and Girls Conference at the Guildhall aimed at reducing gender-based violence.