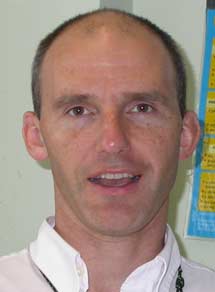 General information:
Dr Lopez qualified in medicine at Nottingham University in 1986. He worked in various specialities across the UK and in Gibraltar before settling to train in child health in 1989. He worked in London and Nottingham as a junior trainee, and then completed several years senior training at the Alder Hey Children’s Hospital in Liverpool. He left the NHS briefly to work at the University West Indies at Kinston Jamaica in 1996. He completed training in North Bristol in 1999.
Before coming to Plymouth whilst his two children were very young he worked in a series of consultant posts in and around Bristol. He took several months off to be at home after the birth of each child, and as a result learnt a great deal about being a parent.   In 2002 he came to work in his present post as a consultant paediatrician at Derriford Hospital.
He is married and has two school aged children.

General areas of expertise:
Dr Lopez is, like most of his colleagues, a general paediatrician. This allows him to concentrate on the bigger picture. It allows him to consider not just the physical, but the psychological aspects of disease. It is as much about investigating ill health, as it is, knowing when not to investigate. Like his colleagues, his focus is on the child and the family.

Particular areas of expertise:
Since 2005 Dr Lopez has managed most complex gastrointestinal and hepatic disease in children cared for in Plymouth.
This is done in conjunction with paediatric colleagues in Bristol and adult colleagues at Derriford.