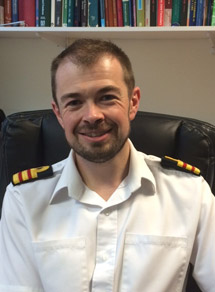 General information:
Surg Cdr Henning was educated in The Royal School, Dungannon, and qualified in Medicine from The Queen’s University of Belfast. After working in Northern Ireland for a short time he joined the Royal Navy and moved to Hampshire. He has worked throughout the Wessex and Peninsula areas during his basic and higher specialist training and was appointed as a Consultant in Plymouth Hospitals in 2012. As a Medical Officer in the Royal Navy he has deployed, and continues to deploy, in various roles at sea and on land. In addition to clinical work Surg Cdr Henning has an interest in health informatics and the use of medical devices.