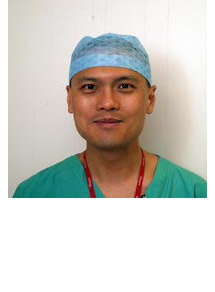 General information:
Hiu Lam graduated from Nottingham University Medical School in 1989. He underwent medical and anaesthetic training in Nottingham, Derby and Oxford where he was also appointed as the Research Fellow at the Nuffield Department of Anaesthetics, University of Oxford. In 1999 He was appointed as an Attending Anaesthesiologist at University of Michigan Medical Centre. He returned after a year to take up a substantive consultant post at Birmingham Children Hospital where he worked from 2000 to 2004. In December 2004 he was appointed as Consultant in Neuroanaesthesia at Plymouth Hospitals NHS Trust where he remains working to date clinically.

He was the Specialty College tutor at Birmingham and Plymouth. At Plymouth he was also Deputy Director of Medical Education and latterly Director of Medical Education until 2014 when he took up the post of Associate Postgraduate Dean for Health Education South West. He is the Chair of the Peninsula Professional Support Unit Expert Panel. Dr Lam has also been a Royal College of Anaesthetists Examiner since 2007 and was appointed as Section Head in OSCE working party in October 2013. Dr Lam is a Honorary Associate Professor in Plymouth University Peninsula Schools of Medicine and Dentistry.

Since 2010 Dr Lam has also been the Editor of Continuing Education in Anaesthesia, Critical Care and Pain, a bimonthly BJA and Royal College of Anaesthetists CPD publication.