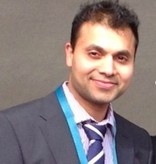 Mr. Mittapalli graduated from the NTR University of Health Sciences in India and completed Basic Surgical Training in Manchester. He was a teaching fellow at Walsall Manor Hospital (2008-10) and an Honorary Clinical Lecturer at Birmingham University (2009-11). He then completed higher surgical training in the East of Scotland Deanery (2010-2016).

He is a keen educator and obtained a Masters in Medical Education from Warwick University (2014) and membership of the Faculty of Surgical trainers at RCSEd (2016). He was the former Director of Education for Association of Surgeons in Training (2015-17). He was appointed as Consultant Vascular And Endovascular Surgeon at Derriford Hospital in February 2017. Currently, he is also Educational Lead for the department of Vascular Surgery.