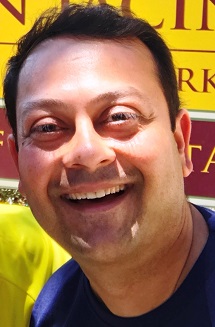 General information:
Dr Shivane graduated in India in 1998. He then completed a post graduate Master’s degree (MD, taught) in General Pathology from Mumbai University in 2001. He also completed a Diploma in Pathology & Bacteriology (DPB, from The College of Physicians & Surgeons of Bombay, 2001) and the Diplomate of National Board of Examinations (DNB, in Pathology, New Delhi, India, 2003).

He worked briefly as a Senior Registrar in the Department of Neuropathology at the National Institute of Mental Health and Neurosciences (NIMHANS), Bengaluru, India, where he developed keen interest in Neuropathology.

Dr Shivane came to England to undertake Higher Specialist Training in Neuropathology in Leeds.  After training in Leeds for 4 years he successfully completed the FRCPath examination in Neuropathology and became a Fellow of the Royal College of Pathologists in 2008. He did a short fellowship at the Massachusetts General Hospital, Boston, USA, under the supervision of Dr David Louis and Dr Matthew Frosch. He worked as a Locum Neuropathologist at Great Ormond Street Hospital for Children, London, for a short period before he was appointed to a substantive Consultant position in the Department of Cellular & Anatomical Pathology at Derriford Hospital in 2009.

His research interests include Schwann cells, myelination, regeneration/repair and Schwannomas, and he collaborates with the Neurosciences Research team at the Plymouth University Peninsula School of Medicine and Dentistry (PUPSMD).