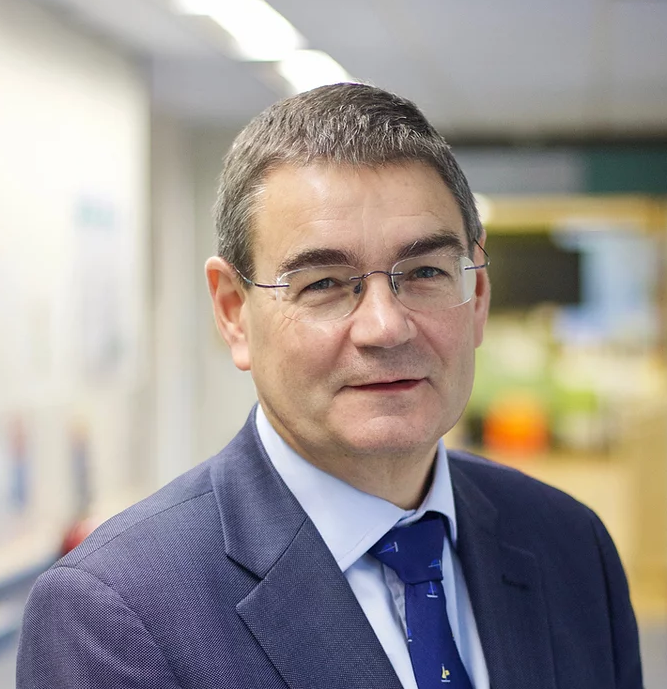 Peter is a Consultant Neurosurgeon on the Specialist Register based at University Hospitals Plymouth NHS Trust. Peter is also an Honorary Associate Professor in Plymouth University.  Peter was an undergraduate at Southampton University Medical School (1982-87).  He graduated with a Distinction in Clinical Medicine, the Sutton Prize for Surgery and the Newitt Memorial Prize.  He was inspired to pursue a career in neurosurgery following lectures in neuroanatomy, undergraduate work on the spinal cord and placements in neurosurgery.  Following medical and surgical “house jobs” in Southampton, Peter spent a year teaching and studying anatomy at the University of Glasgow. Peter then worked with Professor Sir Graham Teasdale (originator of the Glasgow Coma Scale) and colleagues at the Institute of Neurological Science in Glasgow and in the Emergency Department of Glasgow Royal Infirmary.

Peter then undertook training in Trauma, Orthopaedics (including spinal surgery) and General Surgery in Winchester (1990-92).  At this point, he was ready to specialise in neurological surgery.

Peter was appointed registrar in Addenbrooke’s Hospital, Cambridge (1993)  Over the next 8 years he trained in neurological surgery and completed a PhD assessing the mechanisms of brain injury following deprivation of blood flow (seen in cerebral ischaemia and traumatic brain injury).  Peter’s clinical training included cerebrovascular neurosurgery, traumatic brain injury, skull base surgery, pituitary surgery, neuro-oncology, hydrocephalus and spinal surgery. He was awarded a prestigious MRC Clinical Training Fellowship under the supervision of Professor John Pickard CBE and won the Royal Society of Medicine Registrar’s Prize and three other national level prizes for research work.  Following completion of training, he worked as a consultant/ honorary clinical senior lecturer in Scotland for 2 years before moving to the South West.

Peter is committed to establishing and maintaining high clinical standards.  Peter is a Fellow of the Academy of Medical Educators and a Fellow of the Higher Education Academy.  He was awarded a Postgraduate Certificate in Clinical Education with a Distinction.  He has been Training Programme Director for the South West (Bristol and Plymouth) and was SAC Chairman (2017-2020).  As SAC Chairman Peter was responsible for writing a new curriculum for neurosurgery in the UK and Ireland, setting national standards and ensuring high quality training and assessment of trainees.  As Secretary (2015-17) and Chairman (2017-2020) of the National Neurosurgery Selection Board, responsibilities included running the national recruitment process, selecting appropriate trainees for training in the speciality.  Peter regularly teaches at a national level, including cadaveric training, simulation training and training in non-operative skills.

Peter is the inaugural Chairman of the Fellowship of the European Board Examination in Neurosurgery (FEBNS).  This examination is conducted on behalf of the European Association of Neurosurgical Societies (EANS) and UEMS.  He has established a team of examiners and leads the preparation, conduct and evaluation of written and oral examinations across Europe.  He is also a member of the EANS Council and a non-voting member of the EANS Board.

In 2019 Peter was elected as a member of the Council of the Society of British Neurological Surgeons.

Peter is lead for Personal Development and Professionalism at the Peninsula School of Medicine, Plymouth University. This role involves teaching medical students and ensuring students aspire to high standards of professionalism.  He meets with students who are failing to meet expected standards and enables remediation to help provide insight, promote learning and improve outcomes. Peter contributes to high stakes decisions concerning student progress.

Peter’s PhD evaluated the molecular responses to cerebral ischaemia and traumatic brain injury. He has also written a Cochrane Review evaluating the timing of surgery following subarachnoid haemorrhage. As a consultant, Peter has been Principal Investigator in many studies including studies of traumatic brain injury, chronic subdural haematoma and subarachnoid haemorrhage. Peter also has an interest in the outcomes of neurosurgery in older patients. He has co-supervised trainees conducting PhD research, in collaboration with clinician scientist colleagues.

Peter has published a book on head injury (Head Injury: A Multidisciplinary Approach); this has been published as a second edition (2020) entitled Traumatic Brain Injury: A Multidisciplinary Approach.  He has edited the neuroanatomy section of Gray’s Surgical Anatomy and written many book chapters including in the Oxford Textbook of Neurological Surgery; in Brennan’s Clinical Head and Neck Anatomy; in Cinalli’s Pediatric Hydrocephalus; in Moore’s Neurosurgery Principles and Practice; in Moore’s Tumor Neurosurgery; and in Abelson-Mitchell’s Neurotrauma: Managing Patients with Head Injury.  He has edited the E-Brain Head Injury module. This is an internationally available teaching module on traumatic brain injury. He has also authored more than 90 indexed scientific publications.  These include articles in medical education and training. In addition, Peter is Surgical Editor of Advances in Clinical Neuroscience and Rehabilitation and reviews articles for Medical Journals.

Peter has delivered numerous invited lectures and podium presentations at National and International Conferences. Work he has supervised has been recognised in the High Scoring Papers section at national and international conferences. He organised the Society of British Neurological Surgeons Conference in Spring 2018.

Peter has been privileged to prepared medical reports regularly since 2000.  These include personal injury, clinical negligence and reports for the Coroner.  He prepares reports for claimants and defendants and has appeared as an expert witness and a professional witness in a range of court settings. Peter has delivered presentations on medicolegal aspects of neurosurgery to medical, legal and mixed audiences.  He has also worked with an Academic Lawyer to enable medicine and law students to work collaboratively in a student selected component in the field of medicolegal medicine.  Peter welcomes medicolegal instructions in areas relevant to his clinical practice.