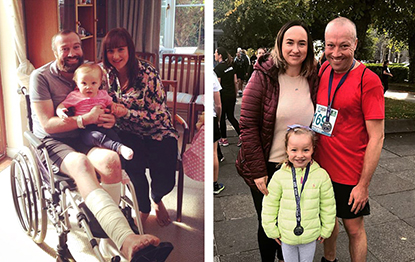 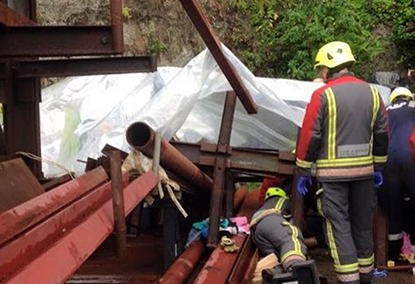 In June of last year, Mark ‘Simmo’ Simmons was only able to run ten steps after being involved in at accident at Falmouth Docks. Last month, he ran over 14,000 steps, completing the Plymouth 10k race in an impressive 56 minutes.

On 20 August 2014, Mark was involved in an accident whilst at work. He was crushed by a large steel rack which contained heavy, flat steel bars. Pinned down by the steel unit, Mark was in immense pain and could hardly breathe, but says thinking of his family and young daughter kept him going.

Mark suffered breaks in his pelvis, arm, a vertebra in his back and suffered a catastrophic open fracture to his leg. He spent three months in three different hospitals. Unable to weight bare, he was confined to his hospital bed or wheelchair. “I was lucky; Derriford saved my life and the amazing Orthopedic Team saved my leg from being amputated,” said Mark.

“I was told that it was highly unlikely that I would ever run again. It’s been just over four years since the accident and I have taught myself; with the help of Diarmuid from The Devery Practice, to begin to run again.”

Mark spent 18 days on Shaugh Ward at Derriford Hospital and now he’s aiming to raise £1,800 for Plymouth Hospitals Charity; £100 for every day he spent on the ward. So far, he’s reached almost £1,000 towards his fundraising target.

“People don’t really know how much a hospital does until they need it”, said Mark. I just want to raise money for the hospital to say ‘thank you’ to all those who took care of me. They really were amazing.”

If you would like to support his incredible efforts, you can visit his Just Giving Page: www.justgiving.com/fundraising/simmo4derriford.

To find out more about how you can fundraise or make a donation to University Hospitals Plymouth NHS Trust, please visit https://www.plymouthhospitals.nhs.uk/fundraising