Liam Brett and his friends Ryan and Adam Frame have raised a staggering £16,503 for Plymouth Hospitals Charity. The money will be donated to Brent Ward, an Oncology Ward at Derriford Hospital.

Liam’s late fiancé, Tash, sadly lost her life to breast cancer five years ago and Liam says he wanted to do something to say thank you to the ward for the care they provided. 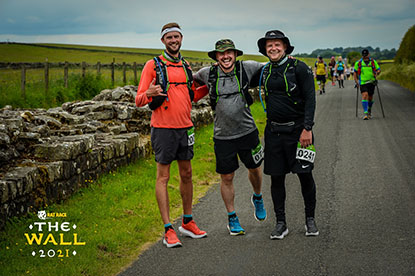 “Tash was up here for months at a time being treated for breast cancer,” said Liam. “She just got taken care of so well. It was five years this year since she passed and I wanted to do something for the ward in her memory.”

The three friends took on a momentous 70 mile run from Carlisle Castle to Newcastle. Just two weeks later they completed Man vs Coast challenge, covering another 23.5 miles from Penzance to Lands’ End, including cliff jumps, obstacles and swimming events.

Liam expected perhaps to raise a few thousand pounds, but was blown away by the generosity of friends, family and colleagues and businesses, including RFBM scaffolding.

The trio were all facing injuries including back problems and tendonitis and to add to this, due to uncertainty around COVID restrictions they only had seven weeks’ notice that the events were taking place. Despite this, with Tash and the staff who cared for her as their inspiration, they all successfully completed both events.

Liam attributes their ability to take part to Paul Maxwell at Maxwell Physio, Rehab and Fitness. “Without him we’d never have been able to take part and complete these events,” said Liam. “He really did save us.”

Liam’s family were there cheering him on every step of the way. Liam said: “Tash and I have a son together, George, who was eighteen months at the time she passed away. My partner now, Becky, has two little boys as well, Max and Noah.” 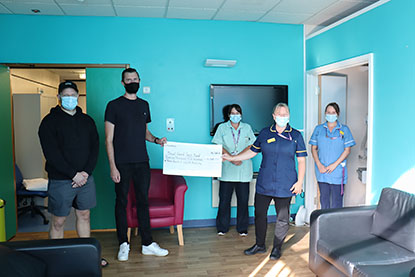 Becky’s partner also sadly passed away from cancer and she and Liam were introduced to each other around three years ago by a mutual friend.

“The events were rough going. But we always say to the boys ‘we never give up’ so then when we found out running they were all saying ‘Daddy make sure you don’t give up’, it really spurred us on!”

Brent Ward Manager Sam Rowe said: “We’re so grateful to Liam, Ryan and Adam for their donation. We’d like to make our day room for patients more comfortable and invest in some Z-beds so partners and family members can have a comfortable place to stay.”