Plymouth Hospitals Charity has received some incredibly generous donations recently from members of the community. We would like to say a huge ‘thank you’ to those who have given up their time to raise money for important causes across the hospital.

Generous donation from ASDA thanks to shopper’s votes 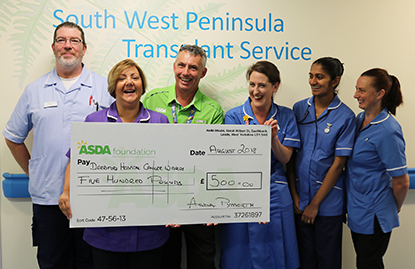 Staff from ASDA visited the hospital recently to present a cheque for £500 to Birch and Bracken wards.

These specialist wards at Derriford Hospital, which support people who are undergoing treatment for cancer, were nominated by the public as part of ASDA’s Green Token Giving Programme.

The programme gives the public the chance to vote for money to be donated to three different causes. A cheque for £500 is donated to the cause with the most votes, with the runners up receiving £200 each.

Plymouth Hospital’s Charity Manager, Corinne Bailey, said: “This donation is wonderful and we'd like to thank the customers of Asda for their generosity and support.”

The money that ASDA has generously donated will be used to purchase new equipment on the wards. 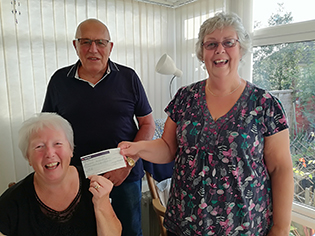 Jacky is a keen craftswoman and Pam encouraged her to showcase her creations.

They got to thinking and decided to open up their shared driveway, inviting people to join them for a tea, cake and crafts day. They raised a fantastic £691.90. Thank you Jacky, Pam and Dave!

Pamela Trace and family donate over £1,000 to Malborough Ward 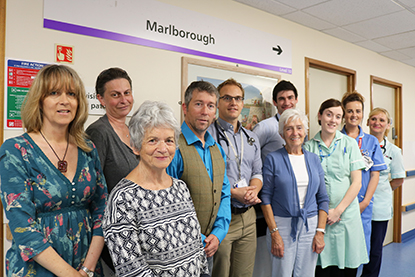 Pamela Trace and her family have donated an incredible £1,345.39 to Malborough Ward.

Pamela met with nursing clinicians on Malborough Ward who cared for her husband, Lester who sadly passed away after a sudden illness. A collection was taken at Lester’s funeral, which family and friends gave generously to.

The family wanted to make a difference for other patients and staff on the unit who had cared for their husband and father.

Plymouth Hospital’s Charity Manager, Corinne Bailey, said: “We will make sure that the money Pamela has entrusted to us will, in Lester’s memory, make a big difference to other patients, staff and families.” 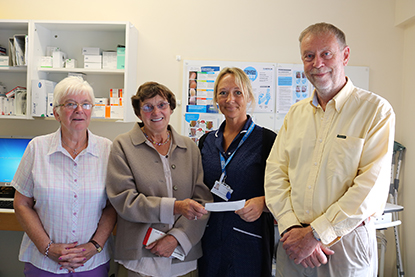 Carol and Peter opened their garden this summer to over 40 people and invited them to enjoy afternoon tea. The friends have long hosted an annual fundraising tea party in Cornwall and this year, they decided to raise money for Derriford Hospital’s Diabetes Unit.

Carole and Peter’s granddaughter, Megan, was diagnosed with diabetes at the age of 10 and the family wanted to give something back to thank the nurses who have helped Megan through a difficult process.

Megan, now 21, leads an active and happy life, although diabetes remains and issue close to the hearts of the entire family.