Ollie’s fundraising journey began a few weeks ago when he decided to take some cakes to his friends and teachers who were still at school to cheer them up. After seeing how happy it made them, Ollie wanted to do something else to help others and set a goal of raising £50 for Plymouth Hospitals Charity. With 30 days to go before he turned six on the 8th of June, Ollie wanted to run a mile every day, only taking a break on Sundays, before he ran mile 26 on his sixth birthday.

To make things even more challenging, Ollie started running his mile-a-day in fancy dress, with costumes including Where’s Wally, Batman, a vampire, a duck and Super Mario. Ollie said one of his highlights happened when he was running dressed as a policeman. “I met a real policeman and he let me sit in his car,” said Ollie. Through rain or shine, Ollie was out running and even managed to film a short message each day to thank people for supporting him.

On the morning of Ollie’s birthday, joined by his parents, Chris and Liz and two very special guests from the Masked Marvels, Spiderman and Deadpool, Ollie ran his final mile dressed as a doctor. He crossed the finish line cheered on by family, friends and neighbours, where he was presented with an NHS medal and Plymouth Hospitals Charity certificate. Within minutes of crossing the finish line, Ollie was coming up with ideas for his next challenge including cycling and even doing a skydive.

When asked why he wanted to raise money for the NHS, Ollie said: “It’s important because it’s to help the doctors and nurses and poorly people.”

Ollie has now raised over £2,600 and the number is still rising! Thank you Ollie and well done on your fantastic achievement! 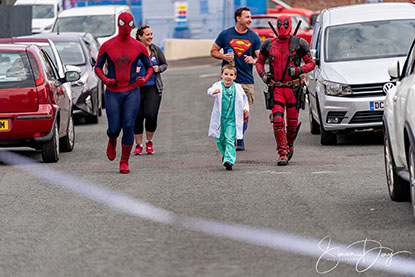