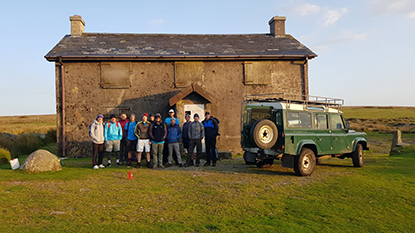 A group of friends from Cornwall have spent a weekend taking on the ultimate Dartmoor challenge in aid of the maternity and fertility departments at Derriford Hospital.

‘The Lanson Boys’ have raised £825 for Argyll Ward and the Ocean Suite, a cause close to Jamie Baker’s heart. He and his wife, Kathy, tried for six years for a family and suffered four miscarriages during this time. Although their next pregnancy had complications, it resulted in the birth of a healthy baby girl, followed by her younger brother two years later.

“We both feel so lucky and blessed that we finally have our family,” said Jamie. “We couldn’t have done this if it wasn’t for the fantastic help

we received from these two wards. The work they do is phenomenal, we will never forget them. That’s why I would like to raise as much money as I can, just to say thank you.”

The weekend saw Jamie and friends competing in swimming, abseiling and orienteering challenges which they had to complete to earn their food and drink tokens. Despite Jamie’s fear of heights and strong winds on the day, he completed the abseil of Sheeps Tor along with physical and mental challenges with the team.

Jamie said: “I would never have had this idea if it wasn’t for my wife, Kathy, daughter, Lyra and son, Brody. The bravery Kathy has shown is unbelievable and we wouldn’t have the family we have now if it wasn’t for her. We had amazing support along the way but she taught me never to give up.”

Jamie also gave thanks to Sean Ryder and Carl Tinkler from Simply Outdoors who organised the weekend, as well as his friends and team mates, John, Gareth, Liam, Andy, Shane, Simon, Peter, Adi, Nigel, Jon and Carl for taking part.

You can read more of Jamie’s story and show your support here: https://www.justgiving.com/fundraising/jamiebaker3?fbclid=IwAR32HT9ayKBFTWWqVnn-zG_3jh_caTNwnmA25QKOb2tRrhVN2GhNNi9ahQA