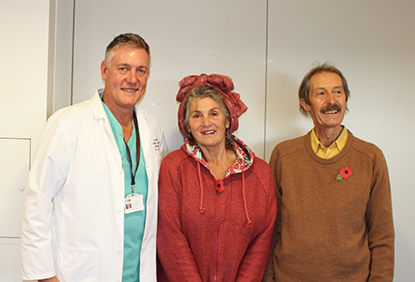 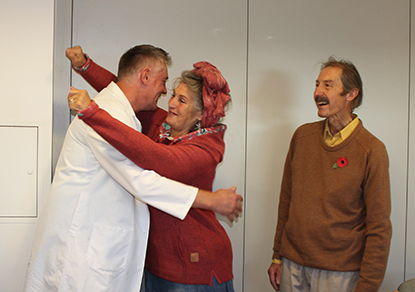 The wing-walk saw Rosie physically standing on the wings of a 1940s Boeing Stearman bi-plane and soaring above the Gloucestershire countryside. With Rosie strapped to the top of the plane, the pilot took off for a 15-minute flight, complete with steep banks and turns and a half loop-the-loop, and reaching speeds of up to 150mph.

Rosie, who is not a fan of heights, said that the pilot offered her a low, stable flight but she told him: “Just go for it, I’m only going to do this once.”

Rosie decided to take on the challenge after her husband, Martin, underwent open heart surgery under the care of Consultant Cardiothoracic Surgeon, Mr Clinton Lloyd and his team.

“The team in the Cardiothoracic Department saved my husband’s life. I wanted to raise some funds for them to say thank you,” said Rosie.

“I don’t like heights, and I feel that if you are asking people for money, you should do something challenging.”

Rosie has raised a fantastic £3,000 which will be used to purchase specialist equipment used in key-hole surgery. She and Martin returned to Derriford hospital recently to say a personal thank you to Mr Lloyd.

“Surgeries like this couldn’t take place without the input of the entire team and donations like this provide a huge boost for morale,” said Mr Lloyd.

“We are incredibly grateful to Rosie for her bravery completing the wing walk and for her generous donation to the department.”

Plymouth Hospitals Charity Development Manager, Corinne Bailey, said:  “When Rosie first got in touch and told us of her intention to Wing Walk, we thought she was incredibly brave.

“When she went on to raise so much money, we thought she was even more incredible. But what has really been so impressive is Rosie's commitment to her cause. She did so many interviews, appeared on the local news, did radio broadcasts and promoted the work of the surgical team at Derriford at every given opportunity.

“This means so much to the staff here. The hospital's charity can spend donations like Rosie’s on specialist equipment over and above what the NHS can afford. We are very grateful to Rosie and it's been a joy to be part of her journey, we wish her and Martin the very best."